Hard to believe, but this is the 20th anniversary of the 17th CVI website. It’s come pretty far from its humble beginnings as a free AT&T WorldNet website. Thank you to all those folks who have contributed their time, effort and information for everyone who has an interest in honoring those who served.

This is also the 130th anniversary of the dedication of the 17th CVI monument on East Cemetery Hill (a couple of months and a couple of days early, to be exact). I’ll be in Gettysburg for a few days this week showing my son-in-law the battlefield, of course spending extra time with the 17th CVI.

A few months ago I received an email from a visitor to the site who was the great-great-grandson of Marcus Comstock, Company A. He had a hardcover copy of Benson J. Lossing’s A History of the Civil War. This copy was issued by the War Memorial Association in New York in 1912 to commemorate the 50th anniversary of the Civil War.

On the inside cover is a hand-colored image of Comstock (post-war). I’ve seen 3 of these now – some have post-war images, one has a war-time image, all hand-colored. The majority of this set seems to be found in the original, 16-part softcover set that seems to have been issued on a weekly basis. I’m guessing that it was through a subscription since the Catalogue of Copyright Entries issued by the Library of Congress in 1913 shows these parts being issued each week during summer 1912.

So here’s the question, for anyone who might read this and be able to shed light on it: is it possible that these hardcover copies with the hand-colored and lettered images inside the front cover were done as part of a subscription/sales effort to increase the sale of the bound version? It makes sense – if I were a veteran of the war or the relative of one, this would make the book that much more interesting to me.

If you know, leave a comment. Thanks to Ed Comstock for sharing it with me.

A new image has been added to the Rank and File section. A post-war image of Jacob Krieg (who is listed on the rolls of Company B as Jacob Kreig) was provided by descendant Phillip Dwigans.

Krieg listed his age at enlistment as 44 years old, but later census records make it more likely that he was about 52 when he enlisted. His government gravestone lists his age when he died as 87 years old – in 1897. This would make Krieg one of the oldest enlistees in the regiment. He served until he was transferred to the VRC due to disability in 1864. Krieg stated that he had been wounded at Chancellorsville upon his admittance to the New York State Soldier’s and Sailor’s Home in Bath, NY but there is no official record of that being the case.

Krieg’s 3 sons also served in the military during the war – something that is memorialized on a grave marker in Hillside Cemetery, Cortlandt Manor, NY by his daughter Mary. Krieg is mentioned in the Stamford Soldier’s Memorial as one of those citizens who gave addresses at a rally for the Union a week after Fort Sumter. It would appear that he went the extra yard and enlisted himself the following summer.

One of the more interesting stories of the 17th Connecticut surrounds Elias Howe, Jr. – he of sewing machine fame, whose service in the regiment was told in this blog in July 2015 (Elias Howe, Jr. and the 17th).

In September and October 1867 several newspapers across the country printed a story telling of Howe’s enlistment in the regiment. A highlight of the story is the subsequent enrollment of his coachman, one Michael Cahill. According to these accounts, Cahill was so moved by his employer’s enlistment that he put his name down as well:

The next incident that occurred was one in which the comic and pathetic were blended. The coachman who had driven Mr. Howe’s carriage that evening, attracted by the continual cheers within the hall, had hired a boy to hold his horses, and had entered the building to witness the proceedings. He was a warm hearted Irishman, named Michael Cahill, past the age of military service as defined by law. Upon hearing his employer’s speech, he rushed forward, and clambering upon platform, cried out: “Put down my name, too! I can’t bear to have the old man go alone.”

So down went the name of Michael Cahill, coachman, next to that of Elias Howe. Laughter and cheers, mingled in about equal proportions, followed the announcement of “Mike’s” intentions. – Other names came in with great rapidity.

Later in the account, it is said that after completing his term of service in the 17th, “’Honest ‘Mike’…went to his old home and has advanced from driving Mr. Howe’s carriage to driving his own horse and cart, which he is still doing.”

This is such an interesting story that it begs the question – who was “Honest” Mike Cahill?

A search of the original muster rolls of the 17th finds only one Michael Cahill, age 45, and occupation listed as farmer, who enlisted in Company K on August 9, 1862. The service with the regiment for this Michael Cahill ended when he was discharged due to disability a year later in August 1863.

A search of the US Census Records finds several Michael Cahill’s. While no Michael Cahill can be found residing in Fairfield or Bridgeport in the 1860 census, there is only one who lived in the Bridgeport area in later census years (namely the 1870 and 1880 census). Let’s assume for the purposes of this exercise that “Honest Mike,” working as he did for Elias Howe, resided in Bridgeport, with that city also being a good guess since Company K was made up primarily from residents of Bridgeport and Fairfield.

A check of the 1870 census finds a Michael Cahill, born about 1822, living in Bridgeport and listing his occupation as “drives team.” In 1880 he is still in Bridgeport and is now occupied as a “cartman,” which among other things is someone who hauls goods. In 1884 this same Michael Cahill applied for an Invalid Pension, and one of the contributors to the 17th CVI monument on Barlow’s Knoll was Michael Cahill of Bridgeport. Those census records show his wife’s name as Bridget, and both Michael and Bridget are buried in St. Augustine Cemetery in Bridgeport, CT (this cemetery has an interesting story as well, click here to read about the restoration of this forgotten and neglected cemetery). His gravestone (put up by his grandchildren according to the inscription on the stone) offers no clue to his Civil War service.

Is this, then, the “Honest” Mike of the story? Or is this just a good story put forth in the style of the 19th century press to enliven the story of Elias Howe, Jr.? A look at Cahill’s pension file would offer some clues here.  Perhaps someone knows more about the Michael Cahill/Elias Howe/17th CVI connection but for now the story of old “Honest Mike” Cahill remains something of a mystery.

One of the blogs that this one offers a link to is Emerging Civil War, which generally offers some interesting articles on a variety of topics.

Earlier today I read a guest post by Nathan Marzoli, a historian at the U.S. Army Center of Military History in Washington, D.C. about the late war recruits of the Union Army. Lukewarm Patriots: Examining the Pension Files of Late-War Recruits in One Union Regiment gives some insight, based on examination of some of the pension files of the 12th New Hampshire Volunteer Infantry, into the circumstances of the men who enlisted after the initial waves of recruits into the Union Army at a time when the country was becoming increasingly tired of the war. Marzoli concludes that

The story of the Union soldier – carved out by the likes of Wiley, McPherson, Mitchell, and Robertson – may not yet be complete. In the final year of the war, the remaining volunteers of 1861 in the East were joined by thousands of Union recruits, substitutes, and draftees in their final fight against the Army of Northern Virginia. The stories of these men, no matter their motivations or the circumstances surrounding their enlistment, deserve to be told.

It’s an interesting read – I found myself wanting to know more. Most of the accounts that exist from soldiers of the 17th Connecticut also come from those soldiers who entered service with the regiment in 1862. What about those who came later? For some, their story is clear. For example, Anthony Comstock, served with Company H, for which he is not remembered much at all. He is much better known for his morality crusades following the war, culminating in the Comstock Act of 1873. He enlisted in December 1863 following the wounding and subsequent death of his brother, Samuel following Gettysburg. For others, why did they enlist?

It’s something that would be worth looking at. A quick glance at the roster of Company E shows a few enlistees from 1863 on. Horace E. Banks was mustered into the regiment (along with his 18-year-old brother Wesley) on December 30, 1863, 4 months after his 20th birthday. He served the rest of the war and mustered out with the regiment in 1865, applying for an invalid pension in 1891. In 1917, while living at Fitch’s Home for Soldiers at Noroton Heights in Connecticut, he dutifully completed the Military Census form for the state, where he listed his war service with the 17th CVI. Horace Banks died in 1932…and 21 years later a veterans grave marker was ordered for his grave.

Lewis Roche, listed as a resident of Roxbury, CT, also mustered in with the other recruits in December 1863. Roche dies in the regimental hospital in St. Augustine, Florida in January 1865. There isn’t much more in the easily accessible records on Private Roche.

It’s an interesting topic that I don’t think many people have looked at, and hopefully we’ll see more about these soldiers of the late war period.

The Colors Fly Over the 17th CVI Once More! 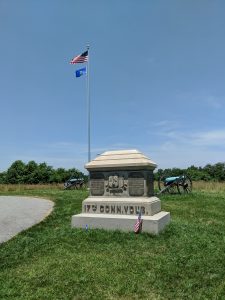